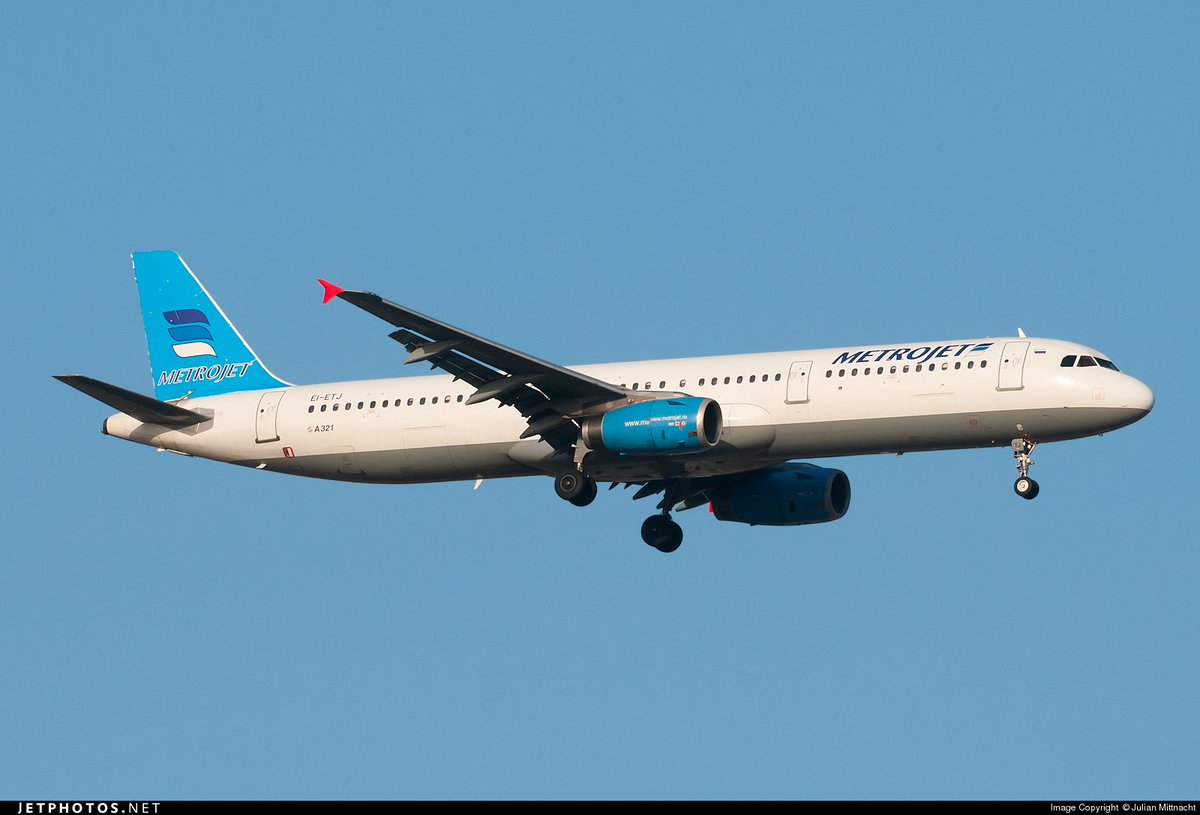 EI-ETJ is an Airbus A321 that belongs to airline Kogalymavia airline.

The flight was traveling from the Egyptian resort to St. Petersburg. It belonged to the Kogalymavia airline, which also uses the brand name Metrojet, an operator popular among Russian tourists going to Egypt.

The plane was supposed to contact air traffic in Turkish Cyprus’ Larnaca after leaving Egypt’s airspace, but failed to do so.

A source at Sharm El-Sheikh Airport told RIA Novosti the pilot of the missing plane requested a change of course, saying the jet would have to land in Cairo.

The source said the crew of the crashed plane had complained to the airport’s technical service that the jet had engine problems.Russian plane carrying over 220 people from Egypt to Russia disappeared from radars, and crashed in central Sinai, according to Russian and Egyptian authorities.

The plane was carrying 217 passengers and 7 crewmembers, he added. Seventeen of the passengers were children. According to the Russian embassy in Egypt, all on board were Russian citizens.

New Delhi, October 30, 2015: Swipe Technologies, India’s leading mobile technology company, and No. 4 brand in the tablets space in the country, has announced the launch of its ONLINE-ONLY flagship smartphone ELITE 2. ELITE 2 is Swipe’s most affordable 4G device to be sold exclusively on Flipkart from 8th November 2015. The device is competitively priced at Rs 4,666 only. The company has also announced the EXCLUSIVE PREVIEW SALE of ELITE 2 for Uber customers, where in Swipe will deliver ELITE 2 directly to Uber customers in Pune, Hyderabad, Bangalore and Delhi.

Expressing delight on the new device and the innovative ventures, Mr. Shripal Gandhi, Founder & CEO of Swipe Technologies said: “ELITE has been a huge success for Swipe, and it was sold out on Flipkart in record time when launched in August this year. For Indian customers, quality wins over everything else. Keeping this in mind, we are coming up with this exciting new offering. We received an overwhelming response for ELITE from the online space and are looking forward to replicate the same magic this time, too. We strongly believe that ELITE 2 will be a true Value for Money proposition that the brand has to offer. Our aim is to offer the best in technology at an exciting price range which absolutely suits the pockets of aspiring youth of India. Also, partnering with Uber will enable us to target the tech-savvy, aspirational online customers to get their hands on this new device.’’

Mr. Sandeep Karwa, Director, Mobile, Flipkart said: “We are excited to partner with Swipe once again for the exclusive launch of ELITE 2. Swipe’s ELITE was a huge success & the product has picked up great momentum on Flipkart. With the launch of ELITE 2, we look forward to enhance the customer traction from across the nation for this most affordable 4G smartphone.’’

Powered by a powerful 64 bit 1.3 GHz QuadCore Processor and 1GB RAM, ELITE 2 guarantees a quicker and seamless multitasking experience and ensures a hassle-free performance. ELITE 2 has an internal memory of 8 GB, which is expandable up to 32 GB. It comes with a stunning 4.5” qHD IPS Display, which enhances the viewing experience. On the camera front, the device has an 8 MP rear camera and a 5 MP front camera. Powered by 1900 mAh battery, the device comes with a Quick charge feature and it can be fully charged within 1 hour 30 minutes. ELITE2 will be loaded with the Swipe’s innovative Freedom OS, an android-based operating system. Freedom OS promises to take the smartphone user experience to the next level by assuring freedom in the hands of the smartphone user with attractive customization features. This OS will certainly give ELITE 2 an edge over its competitors.

The 4G-enabled budget smart-phone runs on the latest OS, Android Lollipop, 5.1, for better experience. Other features such as the Dual-SIM 4G support will ensure unmatched user experience and deliver a true high-performance 4G experience comparable to the best in India at the most affordable price for consumers.

Swipe Technologies is an innovation-centric mobility solutions company, having started its operations in July 2012. Within a short span of time, Swipe has become the leading tablet and Smartphone maker in India. Swipe was started with an aim to bring exciting devices in the growing Indian market and today, it is the leading consumer brand with key innovations across products, pricing and customer support.

Founded by technocrat Mr. Shripal Gandhi, Swipe raised $5 million in May 2014 from the Venture Capital firm Kalaari Capital. In the last three years, Swipe has won a number of accolades including the “Top 50 Inspiring Entrepreneurs of India” by The Economic Times, the “Most Innovation-driven Company in India” by World Brand Congress, the “Most Innovative Start-up” by Franchise India, the “Best Integrated Campaign” by the World Brand Congress & the “Best Youth Brand Tablet” by CNBC. Also, Swipe’s young founder Mr. Shripal Gandhi has been recognized as the “CNBC Young Turks” for his breakthrough strategies and innovation in the field of mobile communication technologies. For details, logon to www.justswipe.com

Keep in touch: Catch up on the latest offers, news & events

A brief outline of the innovative Swedish SME?s

The EU formally suspended most sanctions against Belarus on Thursday. Brussels cited “improving relations” after President Aleksandr Lukashenko released all remaining political prisoners, AFP reported. “This decision was taken in response to the release of all Belarusian political prisoners on 22 August,” the EU statement said.

FOR ALL MEMBERS OF THE ONENESS CLUB :

At first let me specify the initial condition … which is : “Immortality of consciousness“… ie ..“We are forever conscious… as we were unconscious of our unconscious tenures if any“
This initial condition is very much necessary … on the premise …that we don`t remember ever asking the question : `Where is the universe for me?`

ALTERNATIVE NUMBER ONE : There is a mind, a body, and a soul.

That the `I` in me is a soul. It has a permanent identity. But this `I` which is identified with my brain does not include a mind of its own. That mind is not the exclusive property of the `I` of the brain. That `mind` is available to all the `I`s of all the brains, and is common to all. It is always on the lookout for an appropriate biochemistry to give itself consciousness, and life. “We all have the same mind“… Its just that our consciousness is always in the singular. On the other hand, the soul … is indeed the exclusive property of the `I` of the brain. It is extended in space. It is `matter` but of a different kind in the sense that the events in time and space that take place inside a living organism ..which contains a `soul` …are unaccounted for by the normal laws of physics and chemistry.
So when did `I` ie my Soul first arrive in this universe ? …
We can only speculate : Perhaps the souls were manufactured in Supernovas and assembled in the aftermath. The smallest constituent parts viz the Quarks arrived in the very first microsecond… In no time at all, they combined in sets of three to form Protons and neutrons.. before the first second was over they fused with each other to form Nuclei. The electrons joined them about 300 000 years later and atoms were formed. At first they were atoms of Helium and Hydrogen only. They travelled in space for millions of years before joining a star which was about to die as a Supernova. Nucleosynthesis was the process in that Industry ( The Supernova) where the other categories of atoms were manufactured such as Carbon, Oxygen, Nitogen, etc etc. .. And after the Supernova explosion .. at first they were dismembered into their original state (Quarks), later they coalesced to form molecular units .. in a precise ultra strong binding force.. in a precise mix..under a precise environment.. at a precise temperature… all as fixed by the programmers. Of course only an insignificantly small component of matter would have such good luck.. the rest would be ordinary matter …going into tables and chairs etc.
And so the souls were formed… and they travelled in space in search of biochemistries that gave them consciousness. Once experienced in this venture.. the souls had no difficulty in subsequent searches for obtaining consciousnesses.. and so they are forever conscious.
This is of course philosophy… by no means impossible for souls to be formed this way … or any other way …but rather difficult to believe.
And why is it ( the soul ) required ? … except to satisfy our egos… Or is it a motivation to perform better in life ?… but whats the use ?… we are not going to remember anything of our past lives…
Besides … the initial condition.. Immortality of consciousness` … can very well be taken care of in the second alternative.
But there is one problem … a certain paradox that is difficult to resolve without this `soul` … we`ll come to that when we discuss the second alternative.

ALTERNATIVE NUMBER TWO : There is a Mind and there is a body ( but no soul)
(to be continued in Part two)

Surendra Kumar Sagar PART TWO:
ALTERNATIVE NUMBER TWO : There is a Mind and there is a body ( but no soul)
In this alternative … the Mind is all in all…the singular as well as the plural..the part as well as the whole.. Each alternative ensures immortality. Here too the co…See More
Like · Reply · 28 October at 17:47

Naresh Kumar Sagar One has to experience the two simultaneously to get over intuitive science which come effortlessly Just an opinion
Like · Reply · 28 October at 17:59

Naresh Kumar Sagar Hope not disturbing my bigbrotheren
Like · Reply · 28 October at 18:00

Surendra Kumar Sagar Not at all NKS… and thanks for your comments
Like · Reply · 28 October at 23:01
View more replies

Ray Tomes The Buddha said that there is a mind and a body but there is nothing permanent.
Like · Reply · 6 hrs