New Delhi, 28th September 2016: Amandeep Drall carded 1 under 71 in the second round to jump into the lead in the 14th Leg of the Hero Women’s Professional Golf Tour at the Delhi Golf Club here on Wednesday. Overnight leader Siddhi Kapoor could not replicate her first round heroics and is placed second with a total score of 147 after the second round. The INR 7,00,000 event will culminate tomorrow.

After having finished overnight in tied fourth position, Panchkula’s Amandeep Drall played with purpose and put up a much improved performance. She started cautiously, playing a bogey free front nine with a birdie on the 3rd hole. She carded another birdie in the latter half on the 17th hole, while dropping the lone shot of her round on the 16th to finish with a total score of 146.

Kolkata professional and rookie Siddhi Kapoor, who grabbed eyeballs with her first round performance, struggled with the conditions today. Her error prone round of 5 over 77 included four bogeys on the 4th, 12th, 15th and 16th holes along with a double on the 9th. She carded the lone birdie of her round on the 10th hole.

Delhi’s Mehar Atwal carded an even par round of 72 to take the third position. She carded three birdies on the 1st, 8th and 12th holes with an equal number of bogeys on the 4th, 7th and 15th to finish with a total score of 149 after 36 holes. Vani Kapoor too had a much better outing today, and is placed fourth with a total score of 150 after the second round. Her card of 2 over 74 on the day included two birdies on the 5th and 11th holes along with four bogeys on the 4th, 6th, 10th and 16th.

Kolkata’s Neha Tripathi, Kapurthala’s Gursimar Badwal, Chandigarh’s Saaniya Sharma, and Delhi’s Gaurika Bishnoi are all tied for the fifth position with identical totals of 151 after the penultimate round. Neha Tripathi carded 4 over 76 with three bogeys on the 3rd, 15th and 17th holes along with a double on the 16th. She carded the lone birdie of her round on the 12th hole. Gursimar Badwal carded 5 over 77 in the second round with three birdies on the 1st, 11th and 14th holes along with an equal number of bogeys on the 7th, 13th and 16th. However, a triple bogey on the 2nd hole, along with a double on the 10th spoilt her scorecard and she had to settle for the tied fifth position. Gaurika came up with a much better performance to jump seven places with a round of even par 72. She carded three birdies on the 4th, 8th and 14th holes while dropping shots on the 2nd, 3rd and 9th. Saaniya’s round of 3 over 75 included two birdies on the 13th and 18th holes along with bogeys on the 2nd, 3rd, 10th, 14th and 17th.

Pune’s Shweta Galande and amateur Shreya Ghei are tied for the ninth position with identical totals of 153, followed by Delhi’s Ankita Tiwana in the 11th position.

With the top half of the draw within a shot or two of each other, the final round tomorrow is likely to witness keen competition among the contenders.

The Ridge and the City:Environmental Politics in Delhi 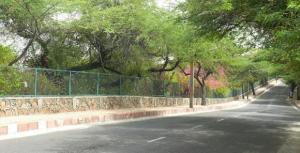 aseannews.wordpress.com – This presentation explores the environmental politics of the Delhi Ridge, a hilly area that cuts through the National Capital Territory. The Ridge is often described as the green lung of Delhi, a c…

To celebrate the 109th Birth Anniversary of “Bhagat Singh”

aseannews.wordpress.com – To celebrate the 109th Birth Anniversary of “Bhagat Singh”, http://www.mintageworld.com launched a docudrama on the history of the various stamps and coins being launched to celebrate his life, struggle a…

sagarmedianews.wordpress.com – After an exciting day 1 of stage Balkhu’s Epiphany at the 12th Hero MTB Himalaya and Cory Wallace claiming the overall stage leader podium, day 2 witnessed spins in luck of many riders. After a tou…

The 6ft 9in hoopster, who has been training at the New York Athletic Club with coach Ross Burn in Manhattan, said he has trained hard and is confident of getting picked by a D League team in the draft.  “I am happy with the efforts I have put in and I will continue to work hard and make the most of this opportunity because not many get such a chance.”

Palpreet, who had impressed NBA champion Brian Shaw in the national finals of ACG NBA Jump held in the last week of February, was part of the national tryouts held on August 14, 2016 in New York.  Over 200 pro basketball hopefuls exhibited their talent in front of NBA D-League player personnel executives, coaches, and industry scouts that day.

Palpreet sounded confident despite knowing he had competed against over 200 other NBA aspirants.  “The competition is tough but it is great to know you are competing with the best to play in the best league in the world.”

Palpreet Singh was discovered as part of an NBA talent search in India.  There are more NBA talent searches planned in India and other countries as part of the league’s ongoing international initiatives.  The NBA is devoted to identifying and developing talent abroad both on and off the floor.