Notable turn around in Mining sector under NDA Govt- Tomar 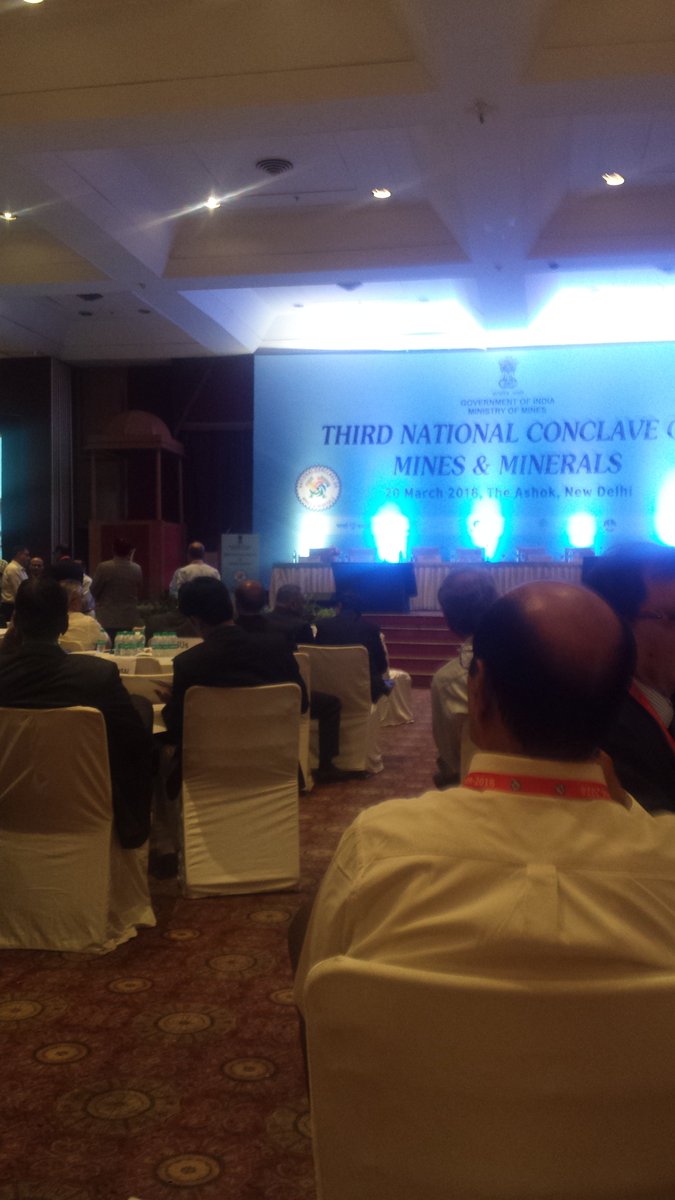 The Union Minister of Mines Shri Narendra Singh Tomar has said that there has been a notable turn around in the mining sector ever since government has taken initiative for policy reforms. In the current year up to January, 2018 the mineral production in terms of volume has registered a growth of 6% when compared to same period last year, which he described is a robust one. Addressing the 3rd National Conclave on Mines & Minerals today in New Delhi, he emphasized the underlying importance of the mining sector as it provides basic raw materials to many important industries.

Shri Tomar said that to make the auction process less cumbersome and help states auction mineral blocks quickly, the Ministry of Mines has amended the Mineral Auction Rules 2015 in November 2017.  The amendment has facilitated the auctions in a big way. A record number of 41 mineral blocks have been put on auction within 3 months of the amendment, whereas 27 blocks were put up on auction earlier in 8 months from April to November 2017.  Total estimated revenue to the state government over the lease period from the blocks already auctioned is Rs.1,43,893/- crores.

The Portal for Pradhan Mantri Khanij Kshetra Kalyan Yojna (PMKKKY) monitoring along with Registration and Returns module of Phase I of the Mining Tenement System (MTS) was also launched by the Shri Tomar during the award function in the conclave. MTS primarily involves automating the entire mineral concession life-cycle, starting from identification of area and ending with closure of the mine; and connecting the various stakeholders for real-time transfer of electronic files and exchange of data. MTS will facilitate end to end national scale accounting of all the minerals produced in the country from the pithead to its end use, reducing the scope for illegal mining.

The PMKKKY scheme is to be implemented by the funds collected under District Mineral Foundations (DMF) to be utilized for the welfare and development of the mining affected areas. The module for monitoring portal of PMKKKY implementation captures from the collection and accrual of funds, to its utilization and monitoring for implementation of projects. Over Rs.17,000/- crores have been collected under PMKKKY and 56,000 projects launched.

A ‘Sand Mining Framework’ was also launched by the Shri Tomar. This Framework has been prepared by the Ministry of Mines from the study conducted on sand mining in various States and intensive consultations with institutions like National Council for Cement and Building Materials (NCCBM), Cement Manufacture Association (CMA), Public and other stakeholders while preparing the sand mining framework. The suggestions in the Framework will provide a roadmap to the States helping them to frame their policies and act as a check on illegal mining of sand.

Shri Tomar and Minister of State for Mines Shri Haribhai Parthibhai Chaudhary felicitated the 5 Star rated mines in the Conclave to the top 20 mines in the opening session and remaining 37 mines in the valedictory session. During last conclave held at New Delhi on 15th Feb 2017 total 32 mines were awarded with 5 stars on the basis of performance during 2015-16. The performance of mines during 2016-17 has improved and total 57 mines have been awarded 5 star ratings.  The star rating system has led to a self-driven mechanism for adoption of best practices and for exhaustive and universal implementation of Sustainable Development Framework in mining.  This would substantially address the ill ecological impacts associated with mining activities and will eventually result in ensuring the handing over of mining area to the community in a better ecological condition. The Hon’ble Minister also urged the states for adoption of the star rating system for minor minerals. The model template for the same has been circulated by the Union Mines Ministry on 30.01.2018.

The conclave will strengthen the efforts of the Ministry in enabling the mining sector to contribute its fullest to foster the rapid growth of national economy and employment generation. It will help the Central Government to further improve the policy environment to promote best practices and addressing various issues in the mining sector.

The last two conclaves were held at Raipur and New Delhi in 2016 & 2017 respectively. The representatives of State Governments, mining industries, industry associations, academic institutions and others participated in the conclave and raised various issues, challenges and opportunities in the mining sector to realize its optimum potential for the sustainable development.