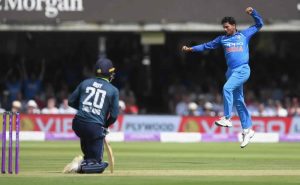 England recorded a stunning 86-run win over India in the second ODI at Lord’s last night to level the 3-match series, 1-1. Opting to bat, the hosts posted 322 for 7 in the stipulated 50 overs riding on Joe Root’s 113 not out, and half centuries by skipper Eoin Morgan and David Willey. In reply, India were bundled out for just 236. Paceman Liam Plunkett bagged 4 wickets. Suresh Raina top scored for the visitors with 46, followed by captain Virat Kohli at 45. MS Dhoni, who made 37, became the fourth Indian and 12th overall to score 10,000 runs in ODIs. Root was adjudged man of the match.
The third and final one dayer will be played at Leeds on Tuesday. Team India is eying its 10th consecutive bilateral one-day series win. The third ODI will be followed by 5 Test matches