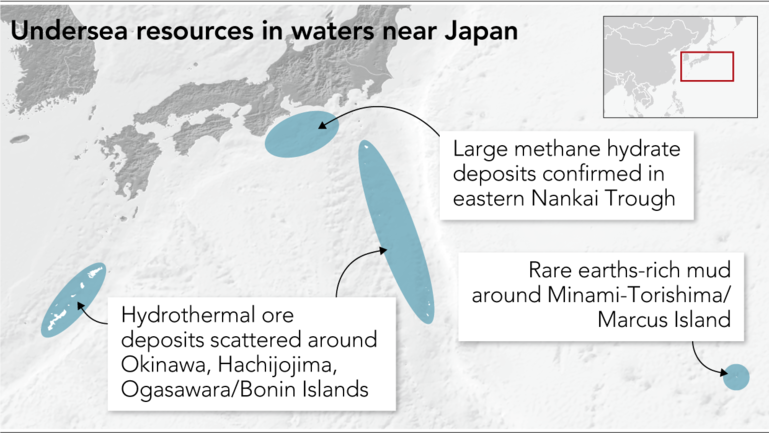 The subsidiary plant in the Shizuoka Prefecture city of Susono will cease production as early as fiscal 2020, marking the Toyota group’s first reshuffle of passenger vehicle assembly operations in 11 years.

The plant produces an estimated 50,000 vehicles a year, including the Porte and Spade compacts, the JPN Taxi, and the Century luxury sedan.

Production of the Porte and others will move to Miyagi and Iwate prefectures in the northeast. The Century may go to a facility in Toyota’s home prefecture of Aichi.

The Shizuoka plant’s roughly 1,100 workers will be reassigned to the northeastern Japan facilities in phases, starting this fall. A nearby development center in Shizuoka will continue operations.

Toyota will look for new ways to utilize the Shizuoka site within the group.

On innovation front, Toyota Motor and other companies teaming up with academia to tap into the metals.

If mined, these rare earths could shift the regional balance of power in Japan’s favor when it comes to resources.

It is estimated that there are deposits of terbium in Japanese waters equal to about 11,000 years’ worth of domestic consumption. For yttrium, the figure is 4,900 years; for dysprosium, 930 years. When news broke in April of the presence of rare earths in the seabed around the remote Japanese island of Minami-Torishima, also known as Marcus Island, it sent shock waves through related industries.

Rare earths are essential to a number of important technologies, including the high-performance magnets needed to power hybrid and electric vehicles.

The estimated 16 million tons of undersea resources are in an area covering 2,500 sq. km. The untouched deposits of rare earths have been described as semi-infinite. Tokyo shares jumped following the announcement, with related companies, such as Modec, rising strongly on speculative buying.

University of Tokyo’s Rare-Earth Rich Mud Development Promoting Consortium, chaired by professor Yasuhiro Kato, is leading the project. It brings together about 30 players in the resources business, including Toyota, Shin-Etsu Chemical and JGC, as well as Modec. The aim is for the participants to contribute human capital and knowledge in their fields — exploration, dredging, ore refining and materials development — to bring the mining project to fruition.

The rare earths are especially concentrated in the seabed mud off Marcus Island. To collect them, pipes are sunk into the sea floor and used to pump up the mud. Separation and refining allow the rare earths to be extracted. Kato’s efforts are directed at developing an efficient recovery technology. “We are trying to make this commercially available in the next decade,” he said.

Japan and China were feuding over the Senkaku Islands, which Japan controls but China claims as its territory. China restricted exports of rare earths in an effort to pressure Japan over the issue, pushing prices higher. China has a virtual monopoly on some rare earths.

The restrictions were a blow to Japanese manufacturers, whose stock of dysprosium, used to make high-performance magnets in hybrid vehicle motors, ran low. Amid cries for greater resource security, Japan moved quickly to secure supplies of rare earths, hoping to lessen its dependence on China.

However vast the deposits may be, to extract rare earths from the ocean floor will be costly. There are those who doubt the project’s viability, given that alternative materials have become available since the Japan-China dispute flared up. But while new sources of supply have come onstream, China still controls 85% of the world’s rare earth production.

Prices for other hard-to-find resources, such as lithium and cobalt used in electric-vehicle batteries, are rising amid tight supplies. Given the rising costs of mining due to tighter environmental regulations, increasing self-sufficiency in strategic resources makes sense.

Japan’s submarine riches are not limited to rare earths. Others include hydrothermal minerals such as gold, silver and copper in waters off Okinawa and the Ogasawara or Bonin Islands. Materials for batteries, such as cobalt and nickel, are present in rocks found in the cobalt-rich crust. Other potentially valuable resources include methane hydrate in the form of crystallized methane, known as “flammable ice,” which can be used as a fuel.

Japan Oil, Gas and Metals National Corp., or JOGMEC, mined 16 tons of ore in 2017 from underwater hydrothermal deposits in waters near Okinawa. It also prospected for methane hydrate. Because the deposits lie deep in the seabed, the company has only just begun to tap the resources.

Cost is the biggest obstacle in deciding whether or not to develop natural resources. Depending on the type of rare earths present and their concentration, the cost of undersea extraction can be many times that of aboveground mining, according to industry experts. A mining base would have to be built above the water, along with refining facilities. “The investment costs don’t seem consistent with making a profit at the present time,” said a representative of one trading company.