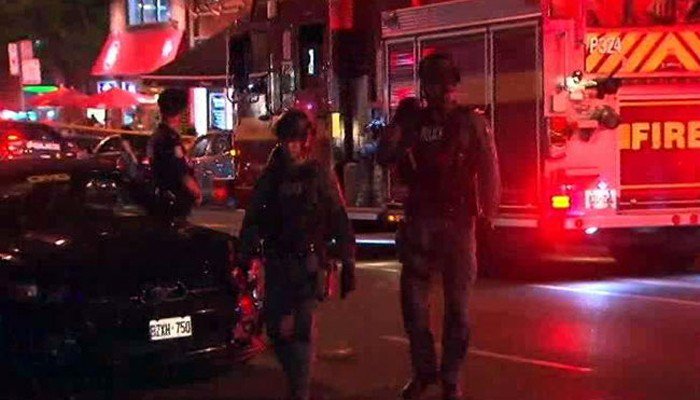 A gunman opened fire in central Toronto on Sunday night, injuring nine people including a child before being shot dead, police reported.
A woman has died and a young girl is in critical condition after a gunman opened fire Sunday night in the Toronto neighborhood known as Greektown, police said.
Thirteen people were injured and the gunman has also died, police say.
Witnesses told the Toronto Star that a man dressed in black had fired a gun multiple times, some estimating that he fired up to 20 shots.
Police spokesman Mark Pugash says it’s too early to say whether the shooting is terrorism.

Toronto Police said they had responded to a call at around 10:00 pm (0200 GMT Monday) in the city’s Greektown district.

“Conditions of victims not known yet. A young girl is one of the 9 victims,” the police department tweeted.

The police said the nine victims did “not include the shooter who is dead.”

Global News quoted a Toronto police source as saying the suspect is believed to have opened fire at police before killing himself.

Witnesses described to local media hearing about 20 shots and the sound of a weapon being reloaded several times.

Ontario Premier Doug Ford tweeted out a message of solidary with the victims, saying: “My heart goes out to the victims and loved ones of the horrific act of gun violence in Toronto.

“Thank you to all the first responders for acting quickly to help everyone affected.”

The incident comes with Canada’s largest metropolis concerned over a spate of shootings, more than 200, this year. About two dozen have been fatal.