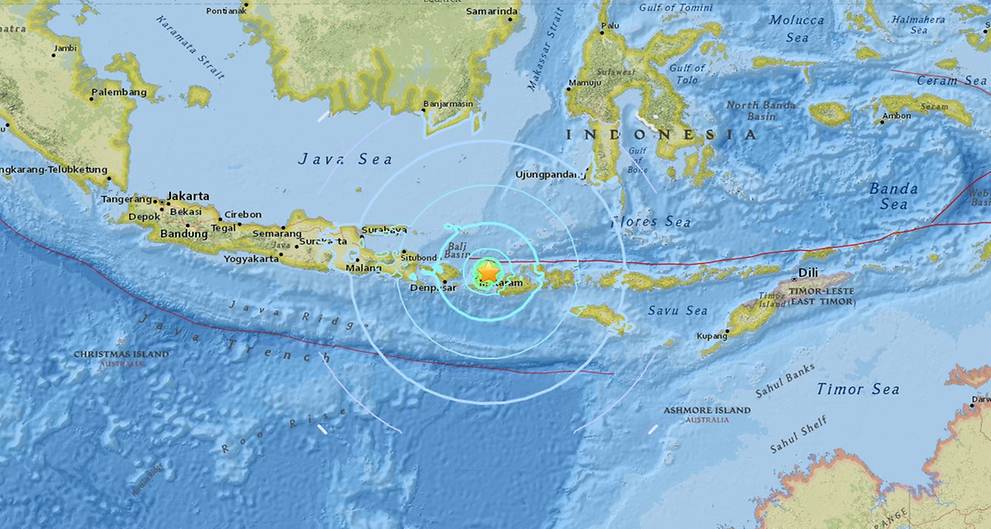 The strong tremor, which sent people running in panic from homes and hotels in the early morning, was followed by two strong secondary quakes and more than 60 aftershocks.

“The earthquake killed at least 10 people, some 40 people are injured and dozens of houses were damaged,” said Sutopo Purwo Nugroho, spokesman for Indonesia’s disaster mitigation agency.

“We estimate the number will keep rising because we are not done collecting data,” Nugroho said.

A 30-year old Malaysian woman was among the victims, he said, adding those hurt were hit by debris.

The jolt was felt some 100 km (60 miles) away in the bustling holiday island of Bali, although there were no immediate reports of damage there.

As authorities scrambled to assess the damage to buildings and infrastructure, popular trekking trails on the remote Mount Rinjani were closed because of landslides, according to the disaster agency.

“The earthquake was very strong… and everybody in my house panicked, we all ran outside,” said Zulkifli, a resident of North Lombok, close to the epicentre.

“All my neighbours also ran outside and the electricity was suddenly cut off,” Zulkifli, who goes by one name, told AFP.

The epicentre of the shallow earthquake struck 50 km (30 miles) northeast of Lombok´s main city Mataram, the United States Geological Survey said, far from the main tourist spots on the south and west of the island.

It said two of the aftershocks measured more than 5-magnitude.

“People in East Lombok and Mataram felt the strong quake for 10 seconds, residents were panicking and running outside of their homes,” Nugroho said earlier, adding people had run for open spaces like football fields.

No tsunami alert was issued, according to Indonesia’s geophysics and meteorology agency.

At the holiday island´s hotels, tourists raced outside as the quake struck soon after dawn.

At the Katamaran Hotel & Resort in Senggigi beach, some 30 guests gathered in the hotel lobby for around half an hour before venturing back to their rooms.

“They calmed down and returned to their room once we explained the earthquake did not trigger a tsunami, everything is back to normal now,” receptionist Ni Nyoman Suwarningsih told AFP.