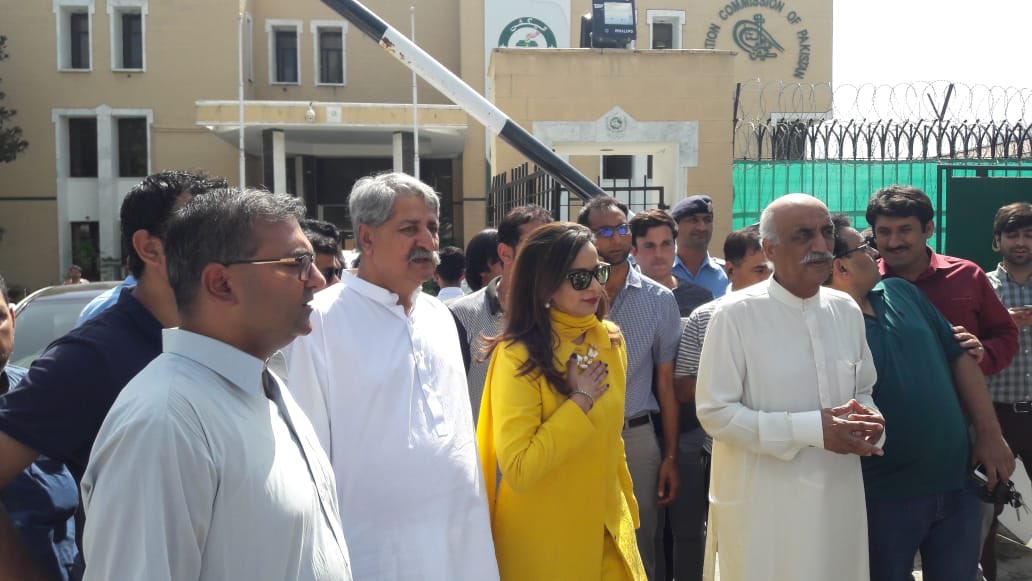 The 35 constituencies where the number of rejected votes is higher than the winning margin is just the tip of the vote-tampering iceberg. We urge the ECP in our mtg to urgently look into many such constituencies where recount and consolidation was done blatantly unfairly #PPP.

Major parties in the opposition on Monday held a meeting and decided to form a grand opposition for formulating a strategy on alleged rigging in the July 25 General Election.

Addressing media, senior leaders of the Pakistan Muslim League-Nawaz, Pakistan Peoples’ Party, Muttahida Majlis-e-Amal and Awami National Party said there is no parallel of rigging on this scale in elections in the country, in which Pakistan Tehreek-e-Insaf’s Imran Khan claimed victory.

“The entire world, the nation and ECP [Election Commission of Pakistan] should note that there is no instance of all parties rejecting election results unanimously like this ever,” said Fazl.

Those stealing the mandate of masses should be ashamed of themselves, he said.

Gilani said that an all parties conference would be held soon, and a strategy would be formulated to take up the issue of rigging.

The parties will play the role of a strong opposition inside and outside the Parliament, the former prime minister added.

The decision to form a grand alliance was taken during ongoing meetings of the parties at the residence of Ayaz Sadiq. The political parties also agreed to protest inside and outside the assemblies.

The grand opposition will issue a white paper over rigging during the elections and meet for an All Parties Conference in two days.

The strength of the grand opposition will stand at 120 in the National Assembly, compared to 116 seats for the Pakistan Tehreek-e-Insaf.

According to sources, political parties in Balochistan will also be taken into confidence over the grand opposition alliance. Meanwhile, Maulana Fazlur Rehman has announced that the MMA will not boycott proceedings of the parliament.

It is expected that following the meeting, Shehbaz Sharif will meet his brother and former prime minister Nawaz Sharif, who was shifted from Adiala prison to PIMS hospital in Islamabad on Sunday.

General Election 2018, the ball seems to be in the court of Pakistan Tehreek-e-Insaf as the party claimed on Monday that it has garnered enough members to form governments both in the centre and Punjab.

According to PTI Spokesman Fawad Chaudhry, the National Assembly is of around 328-330 members, out of which the PTI currently enjoys support of 168 members, including women and minority seats.

In the Punjab Assembly, the PTI spokesman claimed that the party has 180 seats to form a government. The provincial assembly generally comprises 371 members, although this time it is expected to have 360 MPAs.

The party spokesman said that with the aid of the coalition partners, the prime minister will be from the PTI.

Chaudhry further said that in Balochistan the PTI will form a coalition government, adding that the party has a two/third majority in Khyber Pakhtunkhwa.

“PTI will nominate CM Punjab and the decision will be taken by Imran Khan,” Fawad shared.

Candidates from our alliances will be made part of the cabinet, he added.

Fawad Chaudhry said that the independent candidates also signed an affidavit, stating that they weren’t forced to join the PTI.

The affidavits will be submitted to the ECP, he added.

Later in the day, a delegation of PML-Q arrived to meet PTI chief Imran Khan at his Bani Gala residence in the federal capital.

The PTI said that seven PML-Q members and one independent (total eight) gave support to the party in Punjab, bringing the tally to 149 members in the province.

The PML-Q has also rendered support to the PTI in the National Assembly.

PTI leader Jahangir Tareen has left for Karachi to meet with Muttahida Qaumi Movement-Pakistan leaders to gain its support. The MQM-P is pegged to give support of four of its members to the PTI.

He had said that the party was in contact with other independent candidates in Punjab.