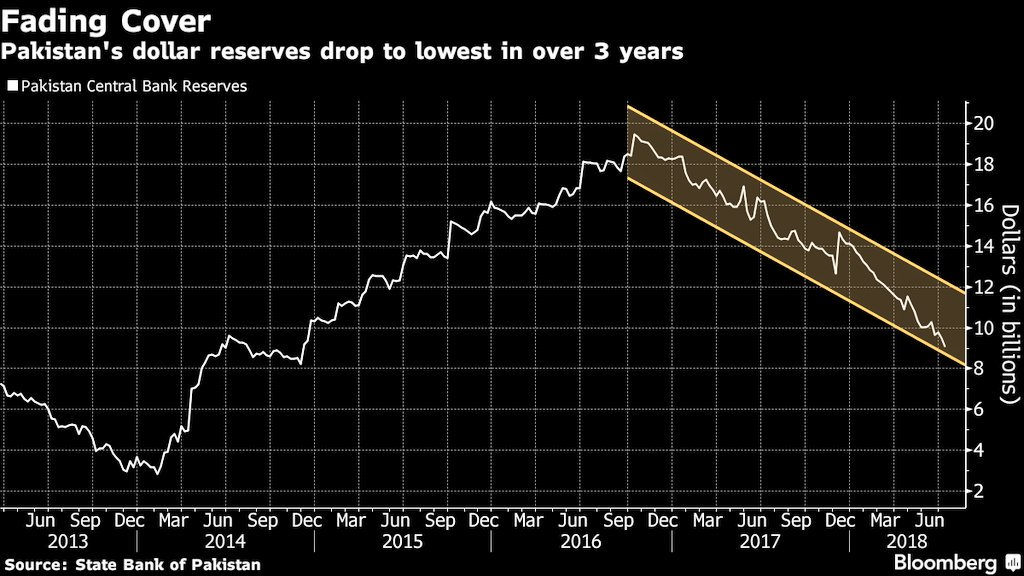 Pakistan Foreign Reserves has reduced to half and is under severe fiscal crisis.Pakistan is at the verge  a balance of payment crisis, 8 billion dollars in the foreign reserves , Pak rupee devalued  to please global institution , this means an explosion of inflation in the next couple of weeks  as in Venezuela and to keep the people united will be daunting task. Record foreign and fiscal debt,weak exports all parameter of healthy economy in fiscal limbo. Pakistan‘s Economy is in shambles the central bank of Pakistan has raised interest rates, the current-account gap has widened by 43 percent in the last fiscal year and foreign-exchange reserves are dropping.

Pakistan facing a serious financial crisis, Asad Umar, the Pakistan Tehreek-e-Insaf (PTI) leader touted to be the country’s next finance minister, has estimated that the economy may need more than $12 billion to overcome the deficit, with a decision on where to source the funds to be made within six weeks.

In an interview with international news service Bloomberg, Umar was quoted as saying Thursday that Pakistan’s financing gap is somewhere between $10 billion to $12 billion, though the new government would need a bit extra so it does not live on the edge.

“The decision needs to be taken in the next six weeks, the further you go forward the more difficult, the more expensive the options become,” Umar said in Islamabad.

Pakistan could turn to the International Monetary Fund, friendly countries and issue diaspora bonds to bolster the country’s depleting reserves, he said.

The country’s deteriorating finances present a key challenge for new leader Imran Khan, who is working to form a coalition government after winning the most seats in the July 25 election.

Many investors and analysts see a bailout from China or the IMF as inevitable, Bloomberg reported.

Foreign-exchange reserves have slumped this year on the back of a widening current-account deficit, prompting the central bank to devalue the currency four times since December and hike interest rates, according to the report.

Umar said his party has not yet spoken to any potential lenders. “No formal work can be started until the government is formed,” he said.

If Pakistan asks the IMF for support, it would not be the first time. The country has gone to the IMF repeatedly since the late 1980s. The last time was in 2013, when Islamabad got a $6.6-billion loan to tackle a similar crisis.

The amount of Chinese loans given to Pakistan over the last 13 months alone comes close to the IMF’s last bailout of $6.6 billion.

Such vast debts to Beijing have prompted worries from US Secretary of State Mike Pompeo, who said this week he would be watching if Khan’s new government uses IMF funds to pay off the opaque Chinese loans.

Umar said he would bring more transparency to the more than $60 billion Belt and Road infrastructure projects in Pakistan and responded to Pompeo’s comments.

“One friendly advice to the Americans, we’ll worry about our Chinese debt, but I think they better handle their own Chinese debt first,” he was quoted as saying.

“We have a serious external debt problem, I’m not saying we don’t, though, we don’t have a Chinese debt problem.”

The PTI leader said his party would not attempt to privatise Pakistan’s bloated and loss-making state companies such as Pakistan International Airlines Corp. and Pakistan Steel Mills.

Umar said within the first 100 days of the new administration, the state-owned firms will be shifted into a wealth fund similar to Singapore’s Temasek Holdings Pvt. to remove them from political interference.

The government will also have to take over some, if not all, of the national airline’s 367 billion rupee debt ($2.1 billion) to start the carrier’s turnaround, he said.