Now many reasons are being enunciated for the fall of  city Genoa, the Morandi bridge collapse, the poor design, poorly executed its dismal location and the load it carried every day from heavy to lighter vehicles  to the tune of 2.5 millions with abysmal monitoring of its maintenance, with no heed to experts on its life together with government inaction has led this bridge fall to big pieces on the torrential rain when lightening stroke  to is nodal cantilever which may not have lightener conductors to its height in city where cloud burst are frequent.

Rescuers scoured crushed mountains of rubble for victims of a bridge collapse in Genoa as the toll rose to 39 Wednesday. Italy’s government blamed the company in charge of motorways for the disaster. Nearly 700 foot section of bridge crashed to the ground, with cars that were driving on it. Right now, rescuers are trying to rescue anyone who might be trapped. Engineer warned in 2016 that Genoa bridge would need rebuilding. The west tower of the 1.1km long bridge tumbled to the ground with as many as 35 vehicles driving on it. 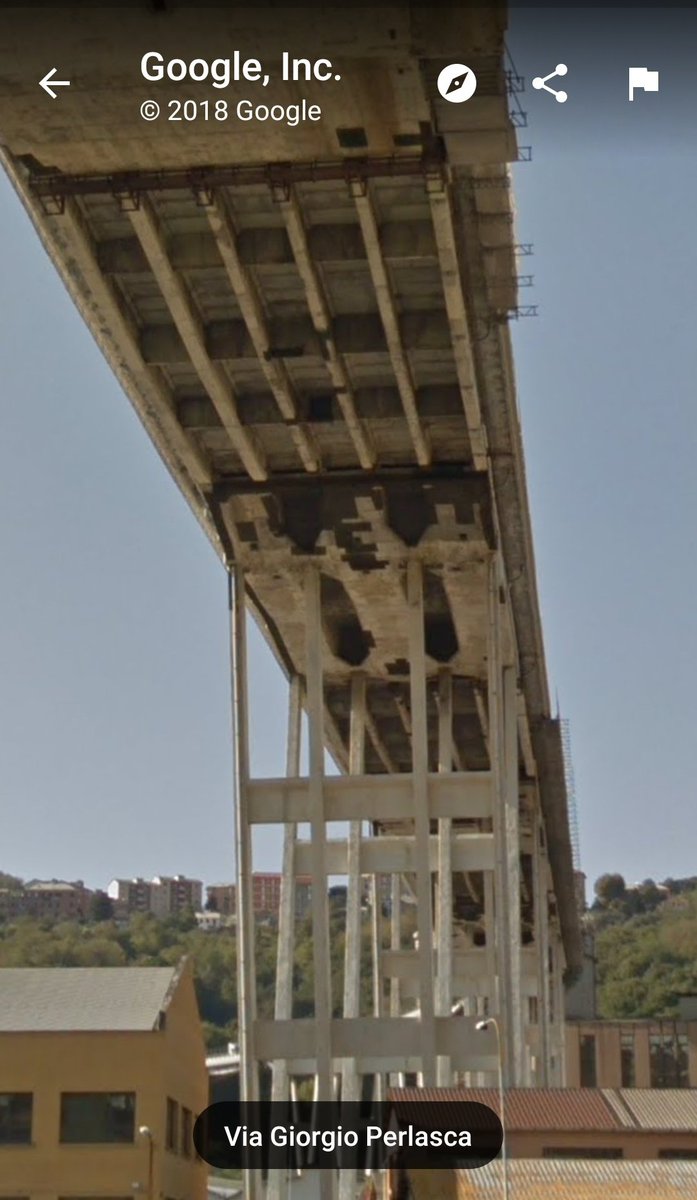 A vast span of the Morandi bridge caved in during a heavy rainstorm in the northern port city on Tuesday, sending about 35 cars and several trucks plunging 45 metres (150 feet) onto the railway tracks below.

At least 39 people are known to have died and 15 injured, according to Italy’s Civil Protection service.Children aged eight, 12 and 13 were among the dead, Interior Minister Matteo Salvini said on Wednesday, adding that more people were still missing.

Three Chileans, who live in Italy, and three French nationals were also killed, according to their respective diplomatic services.

Hundreds of rescuers continued their search on Wednesday after scouring the huge piles of concrete and twisted metal overnight by floodlight, hoping to find survivors.

The tragedy has focused anger on the structural problems that have dogged the decades’ old bridge and the private sector firm Autostrade per l´Italia, which is currently in charge of operating and maintaining the country´s motorways.

Genoese architect Diego Zoppi, former president of the Genoese Order, told the ANSA news agency that the bridge was flawed in its construction.

“The problem with the Morandi Bridge is that the tie rods were made of concrete and not metal. In the 1960s they did not expect concrete to degrade and then collapse. Fifty years ago there was unlimited confidence in reinforced concrete. It was believed to be eternal. With the continuous vibrations of traffic, the cement cracks let air pass through, which reaches the internal metal structure and making it oxidize”.

“For this reason, the bridge has always required extensive maintenance work. It was very expensive to manage.”

Italy´s government said it intended to revoke the company´s contract and hit it with a fine of 150 million euros ($170 million).

Deputy prime minister Luigi Di Maio, who arrived in Genoa on Wednesday morning, earlier said the tragedy “could have been avoided”.

“Autostrade should have done maintenance and didn´t do it,” he said.

Aerial footage of the viaduct shows lines of abandoned vehicles stretching across the remaining section of the bridge, with one truck perched towards the edge of a gaping precipice where a huge part is missing.

Fire official Emanuele Gissi, who told AFP that three bodies were retrieved during the night, said two large cranes were set to be used in the rescue and recovery operation, which is expected to take days.

“All accessible spaces have been explored, now we are moving the largest pieces of debris,” Gissi said.

“We cannot know if there are survivors remaining, but it´s our job to search.”

More than 200 metres (650 feet) of the 1960s bridge crumpled without warning as traffic crossed the busy stretch of motorway on Tuesday, in the deadliest disaster of its kind in Europe since 2001.

The collapse came as the bridge was undergoing maintenance work while the Liguria region, where Genoa is situated, experienced torrential rainfall.

Another issue raised about the bridge was the weight of traffic passing through it, as it is the main artery linking southwest France and northwest Italy with the heart of the country.

“When it was built, it was not built to sustain the traffic of such heavy vehicles,” former Genoa city councillor Gianni Vassallo noted in a 2014 local TV interview.

Italian President Sergio Mattarella said a “catastrophe” had hit Genoa and the whole of Italy.

“Italians have the right to modern and efficient infrastructure that accompanies them safely through their everyday lives,” Mattarella said.

“We need to respond to just one question: Why did this happen?”

As cars and trucks tumbled off the bridge, Afifi Idriss, 39, a Moroccan lorry driver, just managed to come to a halt in time.

“I saw the green lorry in front of me stop and then reverse so I stopped too, locked the truck and ran,” he told AFP.

Some that plunged down with the bridge managed to escape unscathed, including a former goalkeeper for Italian Serie A club Cagliari.

“I was driving along the bridge, and at a certain point I saw the road in front of me collapse, and I went down with the car,” Davide Capello told TV news channel Sky TG24.

The incident is the latest in a string of bridge collapses in Italy, a country prone to damage from seismic activity but where infrastructure generally is showing the effects of a faltering economy.

Pope Francis also sent his condolences to the victims, saying the tragedy has “caused desperation among the population”, at a service for the feast of the Assumption.

Genoa, home to half a million people, is located between the sea and the mountains of northwestern Italy.

Its rugged terrain means that motorways that run through the city and the surrounding area are characterised by long viaducts and tunnels.

The Morandi viaduct, completed in 1967, spans dozens of railway lines as well as an industrial zone with several factories.

It has been riddled with structural problems since its construction, which has led to expensive maintenance and severe criticism from engineering experts.

On Tuesday specialist engineering website “Ingegneri.info” published a piece that highlighted how the bridge had always presented “structural doubts”, calling it “a tragedy waiting to happen”.

One factory, immediately next to one of the viaduct´s support columns, was virtually empty on Tuesday on the eve of a national holiday and seems to have sustained minimal damage.

“I live nearby and I cross the bridge every day on foot,” said Ibou Toure, 23, a translator. “I was never sure of it, you´d always hear these noises whenever lorries were going over. “When I heard it had collapsed, I wasn´t surprised.”