The last rites of former Prime Minister Atal Bihari Vajpayee will be performed at Rashtriya Smriti Sthal in New Delhi at 4 PM today. The 93-year old iconic BJP leader, who passed away at AIIMS yesterday evening, will be given State funeral.

The body of Bharat Ratna Atal Bihari Vajpayee has been kept at his official residence – 6 A, Krishna Menon Marg, where people can pay homage to the departed leader from 7:30 AM to 8:30 AM.

His body then will be taken to the BJP Headquarters at Deen Dayal Upadhyay Marg at 9 AM where people can pay their last respects. BJP President Amit Shah said, the funeral procession will leave Party Headquarters at 1 PM and the last rites will be performed at 4 PM.

A 7-day state mourning has been announced as a mark of respect to the departed leader. In a circular Home Ministry said, the national flag will fly half mast across the country till 22nd of this month. National flag will also fly half mast at all Indian missions abroad today. A half-day holiday has been declared in all offices of central government and central public sector undertakings today.

Delhi government offices, schools and institutions will remain closed today. Most of the state governments have also declared holiday today as mark of respect to Vajpayee. 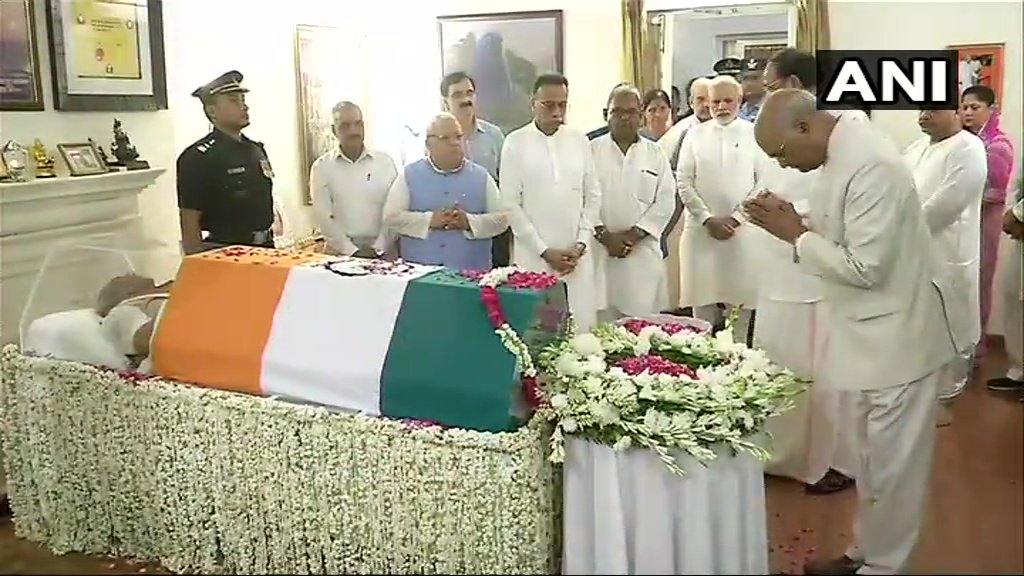 Veteran Bharatiya Janata Party leader Lal Krishna Advani paid his final tribute to ‘closest friend for over 65 years’ Atal Bihari Vajpayee on Friday at BJP headquarters at Pandit Deen Dayal Upadhyay Marg.
Expressing his grief, Advani had yesterday wrote, ‘To me, Atalji was more than a senior colleague- in fact, he was my closest friend for over 65 years.’
Advani further said that the former prime minister guided him throughout his life adding, ‘Atalji will be remembered as the pioneer of the first ever stable non-Congress coalition government at the Centre and I had the privilege of working as his deputy for six years.’
Recollecting his old days as ‘Rashtriya Swayamevak Sangh (RSS) pracharak’, Advani said that his association with Vajpayee has seen days from the birth of BJP to ‘dark months of Emergency’ leading to ‘ the formation of Janata Party and later the emergence of the BJP in 1980.’
The senior BJP leader said, “His captivating leadership qualities, mesmerising oratory, soaring patriotism and above all, his sterling humane qualities like compassion, humility and his remarkable ability to win over adversaries despite ideological differences have all had a profound effect on me in all my years in public life. I will miss Atalji immensely.”  — ANI

Lost words on the demise of Atal Bihari Vajpayee ji. “A great man is one who leaves others at a loss after he is gone” & “The greatness of a man is measured by the way he treats the little man” His last 2006 interview for an ordinary person like me! Tribute to the great soul 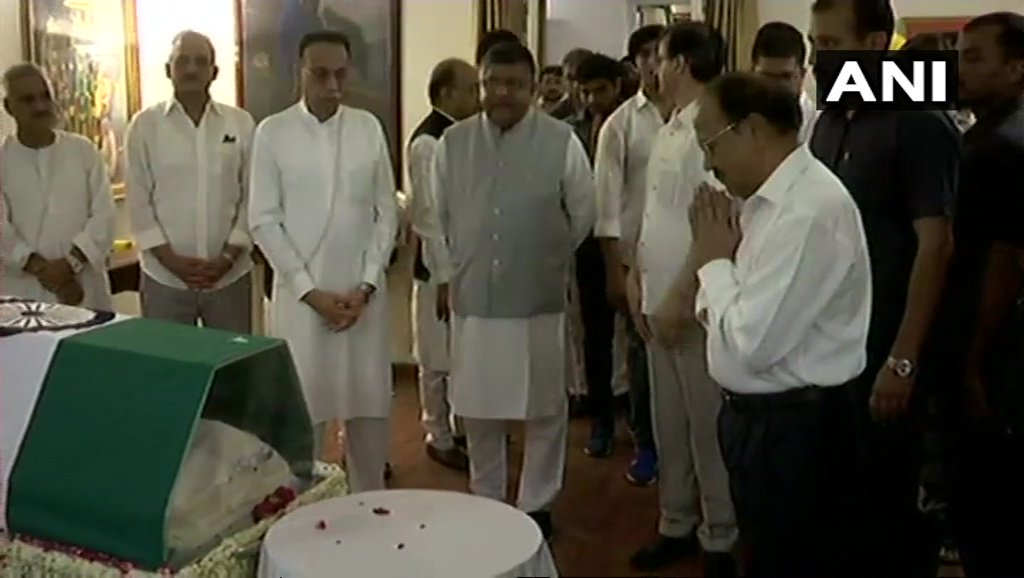 With the sad demise of Shri Atal Bihari Vajpayee, an era has ended. He was liked by his opponents and loved by the party cadres. His amiability and generosity were the unique aspects of his personality. My heartfelt tribute to Shri Atal ji.

My tribute to Vajpayee ji: A true Statesman & a gentleman. A rare breed today. Rest in peace Sir

He wanted India to be everybody’s. He also wanted to strike up a friendship with Pakistan. Unfortunately he couldn’t see that. I hope that the current govt & Pakistan’s Imran Khan govt fulfill his dream, that will be a true tribute to him: Farooq Abdullah #AtalBihariVajpayee 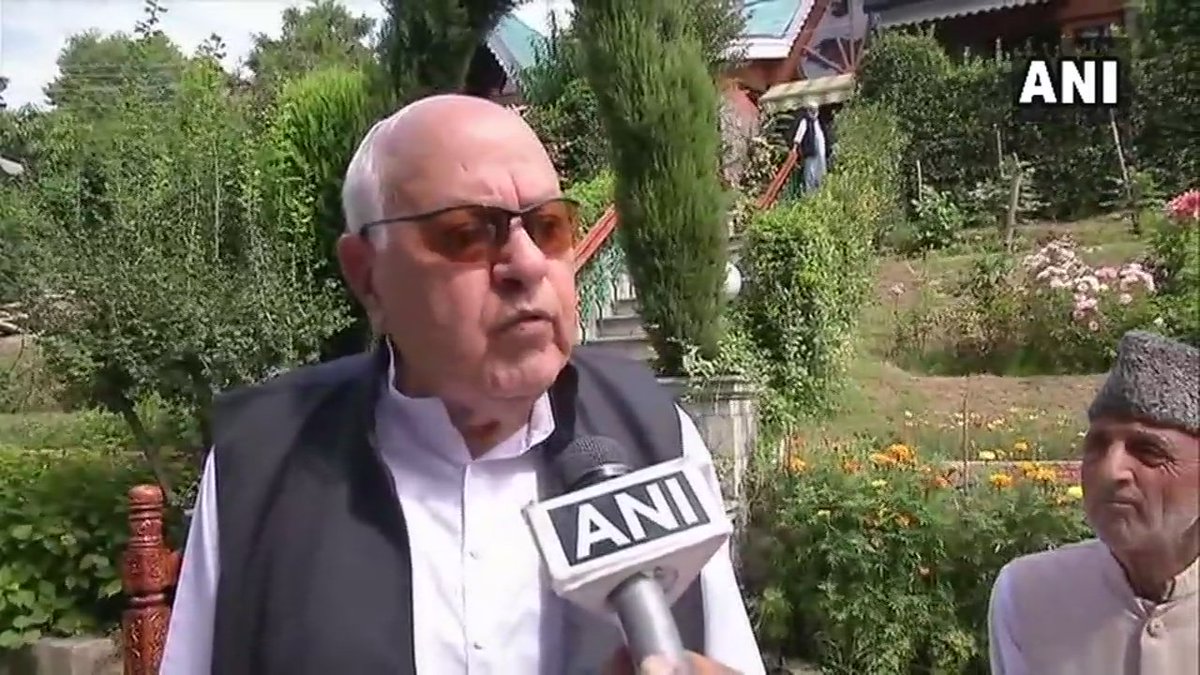 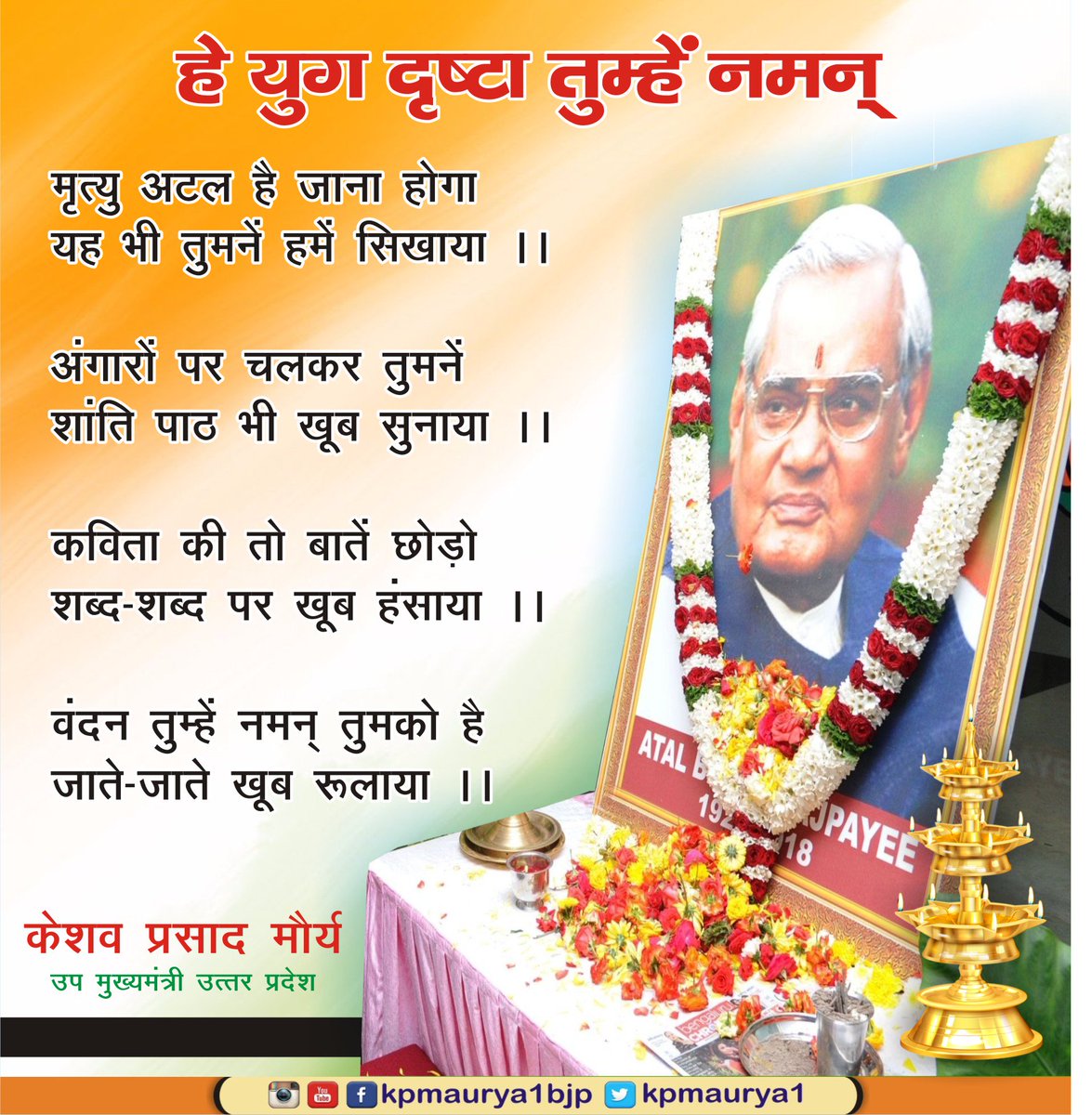 Hundreds file in to BJP HQ for final farewell to Vajpayee :  A huge crowd has gathered outside the BJP headquarters, where Prime Minister Narendra Modi, BJP president Amit Shah and a host of ministers and party workers were gathered to pay their last respects to Atal BIhari Vajpayee.

The air was solemn as Vajpayee’s body, draped in the tricolour, was placed on a platform draped in white flowers. Hundreds of people filed past the body in silence, with a large portrait of a smiling Vajpayee in the backdrop.

Vajpayee, 93, passed away at the All India Institute of Medical Sciences in New Delhi last evening after a prolonged illness.
He will be accorded a state funeral. The funeral procession will leave the BJP headquarters at 1 pm and the last rites will be performed at the Rashtriya Smriti Sthal at 4 pm.
Seen as a moderate face of BJP, Vajpayee’s first became prime minister in 1996, leading a shaky coalition whose members were suspicious of the BJP’s right-wing politics. It lasted for 13 days and collapsed after losing a vote of no-confidence. His second stint as prime minister was in 1998 when the National Democratic Alliance again came to power but that lasted for just 13 months. Finally, the NDA with Vajpayee as PM returned to power in 1999 and was voted out in 2004.
Earlier this morning, Congress President Rahul Gandhi, Andhra Pradesh Chief Minister N Chandrababu Naidu, National Security Advisor Ajit Doval, Army Chief Bipin Rawat, Chief of Naval Staff Admiral Sunil Lanba and RSS chief Mohan Bhagwat paid homage to the former prime minister at his official residence. — PTI