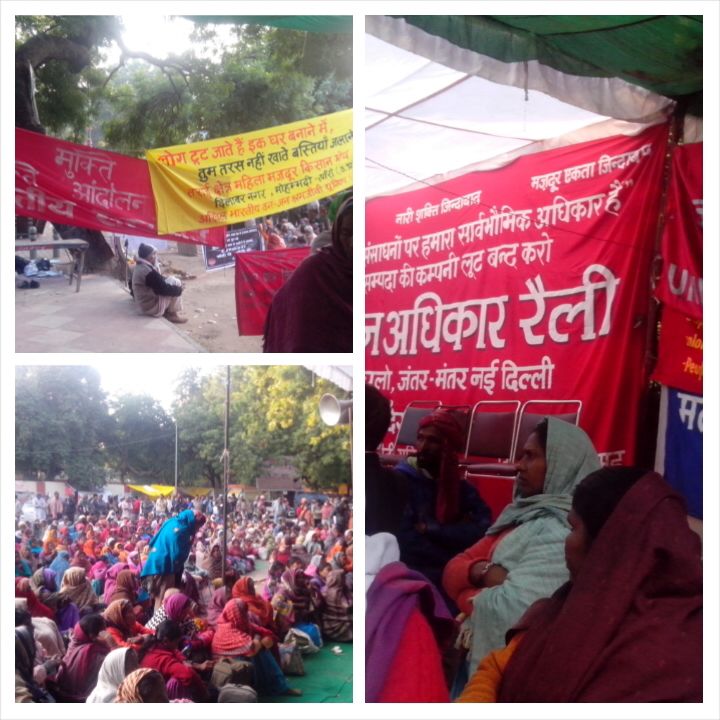 Uttar Pradesh, the Reign of Terror and Repression Continues

New Delhi, August 18 : NAPM condemns the systematic targeting and repression unleashed by the state of Uttar Pradesh on the Adivasis and other forest dwelling communities in Sonbhadra, Uttar Pradesh associated with the All India Union of Forest Working People (AIUFWP). On 22nd of May, 2018 villagers from Lilasi, largely from tribal communities, were attacked and harassed by policemen, when they went to stake claim to community forest rights. Twelve people were arrested, including ten women; FIR was also filed against 24 people including General Secretary and Deputy General Secretary of AIUFWP over false charges manufactured by the Forest Department and Uttar Pradesh Police. The twelve arrested were released on bail back then, despite them not having committed a crime. The police attacked and forged cases against them over false allegations of felling trees illegally, inciting violence against public servants and criminal conspiracy.

However, on 8th June 2018, AIUFWP activists Sukalo Gond, Kismatiya Gond and Sukhdev Gond were unlawfully arrested on their way back from Lucknow. They had gone to meet the Forest Minister- Mr. Dara Singh Chauhan, Forest Secretary- Mr. Sanjay Singh and other officials to lodge complaints against the police brutalities and the Forest Officials who had falsely accused them. They were forcefully picked up from Chopan railway station and were held for over 24 hours, during which the activists were not allowed to contact anyone for help. They are still being held in jail, even though in the ongoing hearing in the High Court, on a Habeas Corpus appeal, State at one time claimed that they were never arrested. There is no clarity on their arrest and the UP State is only playing delay tactics.

The State and the police forces have acted in an unconstitutional manner and continues to target Adivasi communities, so that they can be driven out of their lands. These series of arrests and harassment against Adivasi women is a retaliation of the State against its people who have been struggling to gain their rights under the Forest Rights Act, 2006. Despite the law, the State refuses to acknowledge their rights and has systematically targeted Adivasi women time and again, assuming them to be soft targets. This is extremely condemnable and the those responsible for the violence and state repression deserve strict action and punishment for manhandling women and minor girls as well as senior citizens.

Several formal complaints have been lodged with multiple State authorities, but the police continue to visit the villages, and threaten and harass them. These tactics are similar to the other Adivasi inhabited regions and is a ploy to stop Adivasi communities from claiming their land rights legally. Land is a contentious issue in most tribal areas, where they are being forcefully acquired by the State for various corporate projects and the lives of thousands of Adivasis are being put in jeopardy. The State has not only taken any responsibility of its citizens but also refuses to protect them.

These are clearly an intimidation tactics, since the support for the movement poured from Rahul Gandhi, Congress President and Akhilesh Yadav of Samajwadi Party, who showed solidarity with the jailed Adivasi women and their struggle through their messages. The Uttar Pradesh government now seems to have gone into full drive to arrest key leaders of the movement. It is a highly condemnable act and only shows the desperation and fear of the state and the central authorities while engaging with people who are aware of their rights.

We, condemn the unlawful manner in which the Uttar Pradesh government is targeting senior and ground level activists of the AIUFWP. We stand with the tribal communities battling for their rights under the FRA 2006, and stand with the Union’s leaders, and demand that the Uttar Pradesh government immediately withdraw the false cases lodged against the tribals and other activists.