Navjot Sidhu told reporters in Pakistan today that he was returning to India with 100 times more love than he had brought to Pakistan He also said: If India and Pakistan’s Punjab open their borders, it would change a lot within six months. 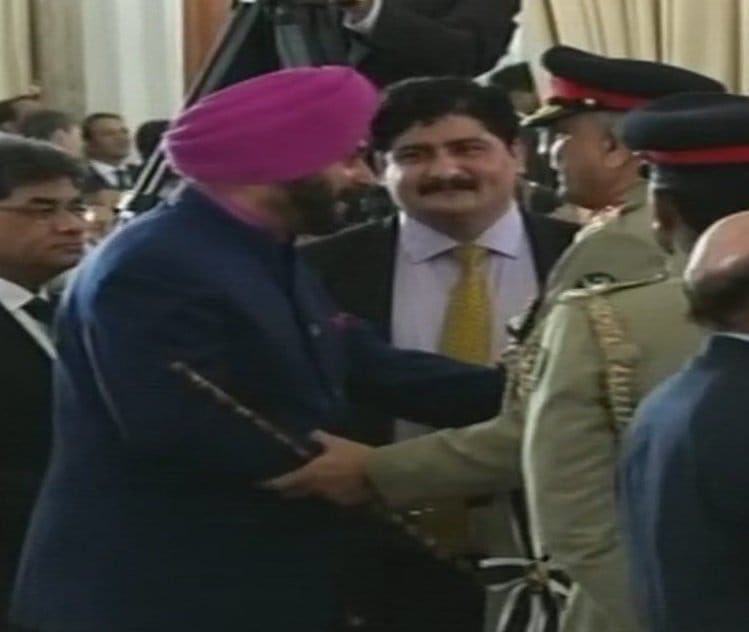 Navjot Singh Sidhu, a former Indian cricketer who travelled to Pakistan a day prior to attend Prime Minister Imran Khan’s oath-taking ceremony as a guest, rebuffed Indian hardliners’ criticism over his tour by commenting on how much love and respect he received from Pakistanis.

“Pakistanis have given me infinite respect,” Sidhu said Saturday night while addressing media here in the city. “The kind of love and affection that I have got from here, it’s… it’s unbelievable!

“I’m very happy at Pakistanis’ hospitality,” he stated, adding that Khan desired peaceful relations with India, which is why New Delhi should also take a step forward to friendly relations with Islamabad.

The Indian sportsman, who has been talking about peace and love ever since he touched down in Islamabad, has been facing a vicious maligning campaign from his country’s hardliners, who have resorted to staging protests and burning his effigies.

Demonstrations had erupted in multiple Indian cities, including Ludhiana.

In matter of hours Navjot Sidhu has, on behalf of India, build the ‘Friendship Bridge’ and was rewarded with promise to Open Borders for Pilgrims to visit Gurdwaras on the occasion of 550th birthday of Guru Nanak Dev ji. When Statesmen & Professionals understand the ‘Long Term Losses’ in the Past and long term ‘Opportunities’ in future resolution to Most Complicated issues is QUICK – I presented the INDUS Treaty at a Indo-Pak business meet in 2008 – in couple of lines in 2-3 minutes and Salman Faruqui was even quicker –

Salman Faruqui INSTANTLY agreed and after a small pause Offered to jointly develop Hydro Power Potential – Pakistan High Commission councilors were embarrassed and complained that I used the word ‘FREE’ too many times.

In 72 years no one has told our people in SAARC that ‘Oil, Gas, Water, Power, Trade, Knowledge, Data, Tourism, Roads & Railways All Can Flow Together’ Over $500b Annual Trade Opportunity.

SAARC Nations INSTEAD of Development & Cooperation had indulged in Dirty Politics – We had the Maximum Number of Political Assassinations. Only top leaders are named here.