Shooter Deepak Kumar today bagged a Silver medal in the 18th Asian Games being held in Indonesia. This was India’s second medal in Shooting.
Bajrang Punia had given India its first Gold of the Games yesterday in the 65 kg division. 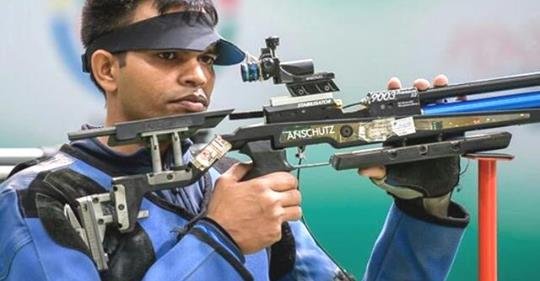 India has  now has 1 Gold, 1 Silver and 1 Bronze in its kitty. Deepak claimed the Silver in the Men’s 10-metre Air Rifle event with a score of 247.7 points.
China took home the Gold, while Chinese Taipei won the Bronze. The other Indian in the event, Ravi Kumar ended at the fourth spot. Ravi had clinched a Bronze medal in the Mixed Team category of the event yesterday along with Apurvi Chandela. Apurvi and Elavenil Valarivan are now figuring in the Qualifications of the Women’s category of the event.
In Women’s Trap, Shreyasi Singh and Seema Tomar are taking part in the Qualifications, while Manavjit Singh Sandhu and Lakshay are set to figure in Men’s Trap. In Wrestling, 2014 Bronze medal winner Vinesh Phogat, Rio Olympics Bronze medalist Sakshi Malik, Pooja Dhanda, Pinki and Sumit Malik will be vying for top honours in their respective weight categories later today.
In Badminton, the Indian Women’s team, spearheaded by PV Sindhu, is now taking on Japan in the quarterfinals. The tie is currently level at 1-1. The Men’s team, led by Kidambi Srikanth, will face Indonesia for a place in the semi-finals.
The Indian Men’s Hockey team will begin its campaign with their opening Group-A match against Indonesia in the evening. The Indian Women’s team had thrashed Indonesia, 8-0 in the opener.
Artistic Gymnastics, Tennis, Swimming, Rowing, Kabaddi and Taekwondo are also among the events that will witness the Indian participation today. With 1 Gold, 1 Silver and 1 Bronze, India is now 8th in the medals tally. China is at the top, with Japan second and South Korea third.