Shri Chaudhary Birender Singh Union Minister of Steel,  addressing the media said we have brought Bureau of India standards within the purview of secondary steel with their valued edition for them to participating in their bids ease at global  or national  spectrum to bring cost benefit to this sector in big way. Next best note was the Ministers to have postulated an idea of Steel -Padma award from ministry of steel for any one to have contributed to steel sector in enhancing its strength or vaue in any of its sectors. The Minister showed his keen interest in zero emission and use of its bye -products in energy efficiency and in converting waste into sustainable and circular economy. 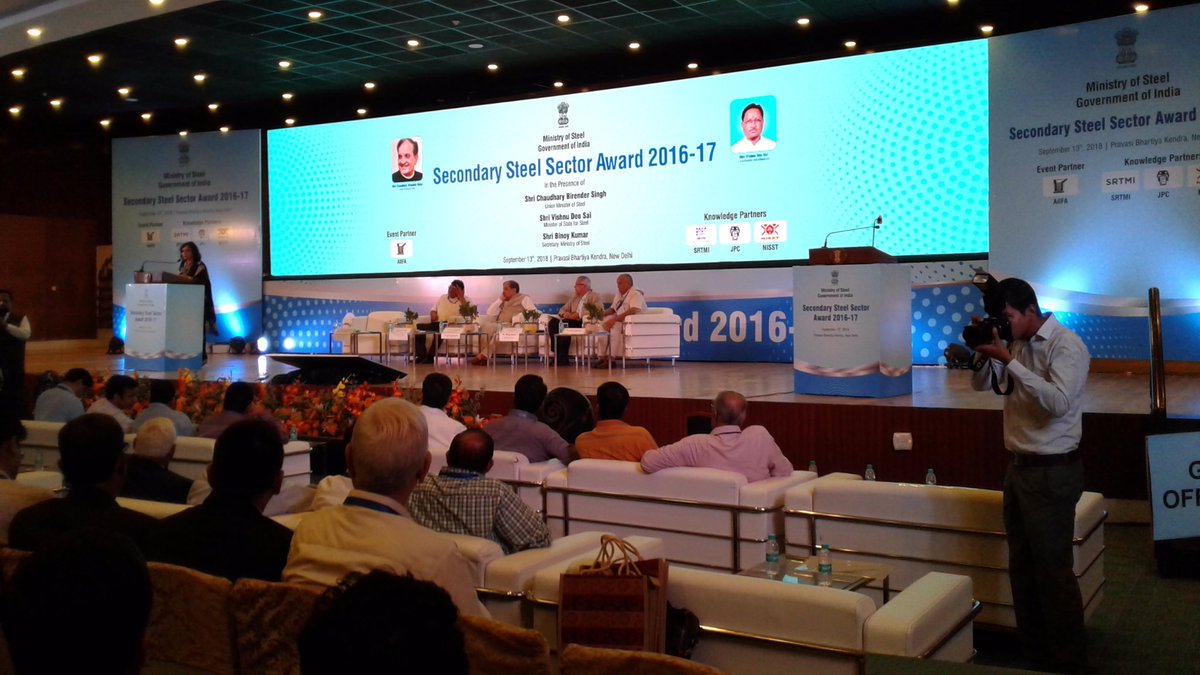 Minister envisaged its efforts in producing high value and special steels with in purview of national growing demands in many sectors.

Ministry of Steel today gave away Secondary Steel sector awards, for the first time, to 26 mini steel companies in recognition of their contribution to the national economy. The awards were given by Union Minister of Steel, Chaudhary Birender Singh, at a function in New Delhi. Twelve companies were awarded Gold Certificates and 14 Silver Certificates for their performance during 2016-17.

Speaking on this occasion Chaudhary Birender Singh said secondary steel sector contributes to more than half of the total steel production in the country. In order to enhance their global competitiveness, the award has been constituted. The Minister further added that in the context of India’s aim to create a globally competitive steel industry the secondary steel sector has to play an important role along with integrated steel players in order to achieve 300 million tonne capacity by the year 2030-31. At present India has 134 MT capacity. Secretary Steel, Binoy Kumar, said this recognition will  encourage the secondary steel sector  to strive for improving performance as well as quality of production. He said the consumption  of steel in India has almost touched 70 kg per capita.

The secondary steel sector is a critical and important segment of the market spanning from construction, machine tools, cold rolled products, pipes, stainless steel, galvanized and color coated steel as well as exports. Nearly 150 units had applied for the awards, of which 82 units were inspected by the selection committee and the awardees were selected based on well-defined criteria.

Steel is one of the core sectors of the Indian economy and India is the 3rd largest steel producer in the world. Steel contributes to over 2% to India’s GDP and creates a virtuous cycle of employment generation throughout the economy.