Former Pakistan Prime Minister Nawaz Sharif, his daughter and son-in-law were brought to their home turf, Lahore, in a special plane after their release from prison in Islamabad, hours after the Islamabad High Court suspended their sentences in a major corruption case. 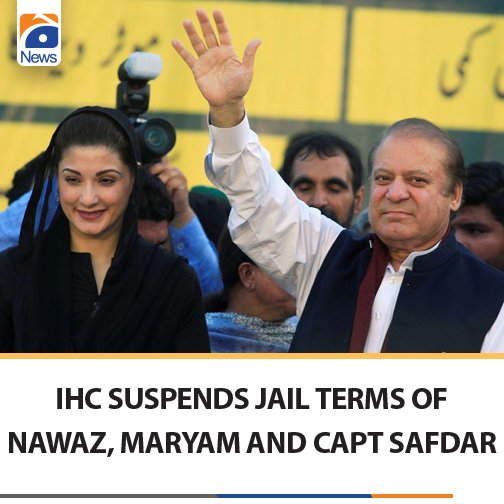 The former premier, his daughter and son-in-law were taken to Benazir International Airport amid stringent security.

A large number of party workers accompanied the PML-N supremo to the airport. Jubilant workers were seen chanting slogans and showering the ex-premier’s vehicle with rose petals.

They reached Lahore through a special plane. PML-N supporters gathered outside Lahore airport, where they accorded a warm welcome to party leadership upon arrival in Lahore.

Nawaz was seen sitting in the front seat of the vehicle, waving his hand as the workers chanted slogans to welcome him.

Later, the caravan reached Sharifs’ residence in Jati Umra, where too scores of PML-N workers gathered to catch a sight of their leader.