“Each vote for Congress in Delhi is a vote for Modi”: CM Arvind Kejriwal at RWA Dialogue 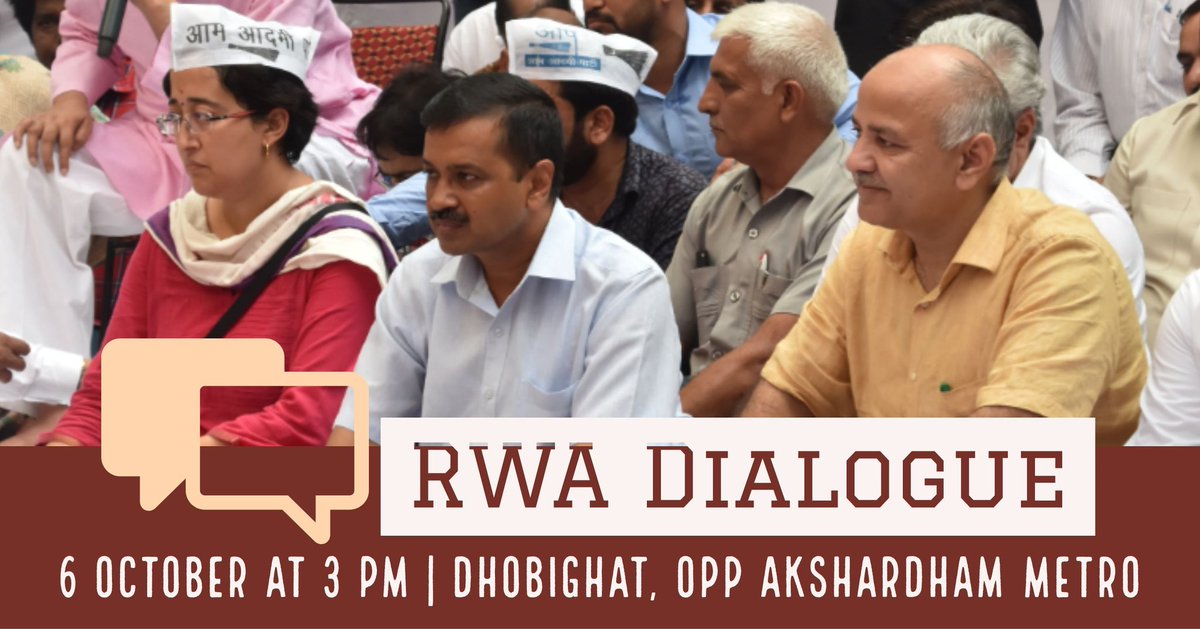 The Aam Aadmi Party held a dialogue with all Resident Welfare Association members of East Delhi Lok Sabha constituency this afternoon. During this interaction, Delhi’s Deputy chief minister Manish Sisodia took live questions and grievances from the audience related to civic and governance issues, and gave directions to resolve several of them.

East Delhi Lok Sabha in-charge Atishi said, “Aam Aadmi Party believes strongly in the power and potential of decentralisation as envisioned for RWAs. This dialogue between the government and RWAs will help resolve many problems.”

Speaking about the upcoming Lok Sabha election, she added, “While the AAP government has notched up several achievements in electricity, water, power and education sectors, there is still some work to be done. The BJP controlled Delhi Development Authority has refused to give Delhi government land to build a super speciality hospital in Krishna Nagar constituency, despite the land being earmarked for a hospital. Had East Delhi had an AAP MP, this would not have happened.”

Chief minister Arvind Kejriwal began his address praising the role of RWAs in ensuring the maintenance of parks in societies. In keeping with their demands, the government has decided to increase allocation to RWAs by 10%. The RWAs must keep up the good work of maintenance, he said, as the MCDs were never going to step up.

Speaking about the garbage crisis in East Delhi, he said, “BJP run MCDs are den of corruption. The money for salaries for sanitation workers is being diverted to contractors. The AAP govt has released Rs 770 crore to East MCD so far this year. East MCD has got double the amount in 6 months compared to what it got in a year during BJP rule in 2014-15. Sanitation workers are being penalised for no fault of theirs by the BJP, because it wants to malign the elected government of Delhi and it has no concern for the sufferings of the people.”

_BJP campaigning for Congress in Delhi to split AAP’s votes_

The AAP chief said about the upcoming 2019 Lok Sabha elections, “If AAP would have had 7 MPs from Delhi, the BJP government in the Centre wouldn’t have been able to hike metro fares. We would not have let them unleash the sealing drive. I urge you to not repeat the mistake made in 2014. AAP is the only party that has worked for your welfare. If all 7 MPs are from our party, 10 times more work could’ve happened.”

“When I talk to people they say Modi has ruined us, he introduced demonetization, GST and unleashed sealing. Our business is ruined, but what is the choice? We don’t want to vote for Rahul Gandhi,” the CM said. “But you have a real alternative in Delhi – the Aam Aadmi Party is the only party which can defeat the BJP today and protect the interests of the people.”

CM Kejriwal added, “There are a huge number of people who want to defeat Modi. But I caution them that don’t make the mistake of voting for the Congress, every vote to Congress will strengthen the BJP in Delhi. In the 2014 Lok Sabha elections, AAP got 33% votes, BJP got 46% votes and the Congress 15% of the votes. As a result, the BJP won all 7 seats.”

Want Delhi to be known for its beautiful parks & gardens: Kejriwal to RWAs

The Chief Minister explained to them the decision made by the Delhi government to financially assist the RWAs for maintenance of parks & gardens and Sewage Treatment Plants (STPs) in these parks & gardens for ease of water for the maintenance.

Beautiful parks and gardens for people of Delhi

The AAP Convenor said that he wanted Delhi to be known as a city of parks and gardens and this cannot be done alone by the government.

“We can’t achieve the target of beautiful parks and gardens without the people of Delhi joining the initiative. That is why we have come with this initiative of financial assistance to RWAs/NGOs for parks and gardens. We have to make them the best and the government is there to support you,” he told the RWAs at the meeting.

I am of the view that our senior citizens, kids and youth should get good parks and gardens to sit in, walk, run and general meet up. Parks are a good place especially for our elders for their morning & evening strolls and kids to play. Our youth uses the park to run and jog. We must provide them with a clean and green area for the same, he said.

The thought behind the initiative is to enhance the green cover of Delhi and to beautify and professionally maintain the parks and gardens of Delhi with the help of RWAs. The ultimate objective was to ensure that each welfare association came forward and adopted a park on its own.
Additionally, the increased green cover of the city will decrease the pollution and its impact.
AAP Government financial aid for beautiful parks & gardens

Further additional parks covering 5000 acres would also be brought under the ambit of this scheme to provide additional financial assistance at enhanced rates.

To overcome the problem of water supply in parks & gardens, the Delhi government will provide the RWAs/NGOs with one-time financial assistance towards the cost of STP at the rate of Rs two lakh per acre maximum.