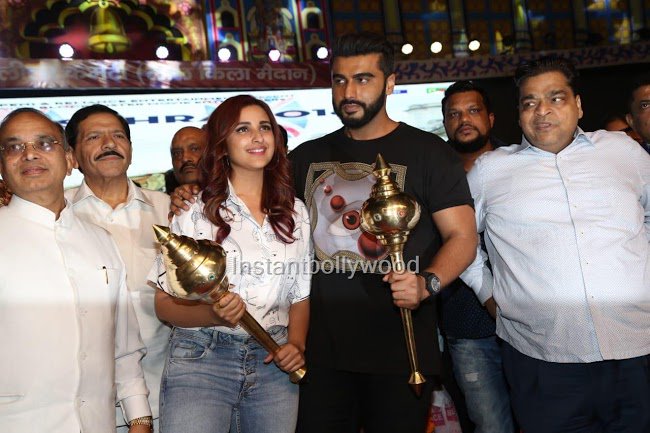 LUV-KUSH RAMLEELA
(The entire team of Ramlila will showcase the magic in the grand event, including performance of politicians & celebrities.)

Arjun & Parineeti in LuvKush Ramleela for the promotions of Namastey England!

The world famous LuvKush Ramleela goes on to another level when entire audience including media peeps witnessed the amazing narration of ‘Lanka Dahan’ by everyone’s favorite Hanuman Ji. Well, along with masses the star cast of upcoming film Namastey England, Arjun Kapoor & Parineeti Chopra were also witnessed for promotions of their movie, which is going to release on 18th of October.

Apart from the visit of Arjun & Parineeti the entire team of Ramleela showcased the story which was narrated by the very well-known personalities of Bollywood as well as the political background too. The character of Angad was played by Manoj Tiwari. The demon king Raavan goes up by Puneet Issar. Whereas Raja Chaudhary portrayed the story of Meghnad. Hanuman Ji was showcased by Vindu Dara Singh. Ram is Angad Hasija. Beautiful Sita Ji is Shilpa Raizada.

Everyone out there welcomed the entire cast of Ramlieela & Namastey England with the big round of applause. Well, apart from Lanka Dahan, the Ramayana play goes along with other acts also. Such as Lord Ram’s visit at Shabri Ashram. Friendly interaction between Sugreev and Lord Ram. On the other hand, Sugreev’s elder brother Baali fought with Sugreev himself and died.

Also with the scene of Lord Hanuman meeting with Sita Ji, and she gives her jewelry which is known as Chura Mani to Hanuman Ji. This is all that happened in Ramleela at Lal Quila Maidan, along with hi-tech sound effects and graphics.

And if we talk about LuvKush Ramleela, therefore the Chairman Ashok Aggarwal and the management is cautious about arranging proper security at the ground throughout the entire period of the festival. The 40-year-old LuvKush Ramleela is started from 10th October and will be showcased till 21st October 2018.

You are requested to send correspondents/photographers/camera crew for the Ramleela.