External Affairs Minister Sushma Swaraj on Saturday met her Icelandic counterpart Gudlaugur Thor Thordarson and held talks over a wide variety of issues in an aim to strengthen bilateral relations. 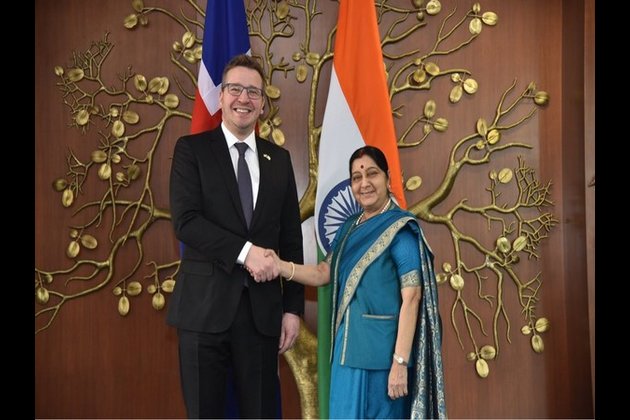 Thordarson is on an eight-day maiden visit to the country, having arrived in the national capital on Friday, held discussions on bilateral, multilateral and international issues of interest.

External Affairs Ministry in a statement said, the two Ministers appreciated the start of direct flights between Iceland and India which will boost trade and cultural ties.

The two sides noted that in the areas such as geo-thermal energy, fisheries, IT, pharmaceuticals and tourism, the two countries could establish strong partnership. The Icelandic Minister appreciated growing opportunities for Icelandic companies in the fast-growing Indian economy.

The two Ministers expressed satisfaction at the ongoing cooperation at multilateral and international forums. The two Ministers also discussed the possibility of enhanced cooperation in the Arctic Council, an inter-governmental Forum of Arctic states where India has an Observer status.

During the delegation-level talks, the Foreign Ministers of India and Iceland deliberated on bolstering cooperation in key sectors such as trade and investment, renewable energy and blue economy among other issues, according to Ministry of External Affairs (MEA) spokesperson Raveesh Kumar.