Myanmar is another state which is in state of semi democracy from totalitarian rule prevailing circumstances are very offensive  to freedom of media and the restrictions on the press, hostility to the media and persecution of journalists has never been as bad here as it is now. 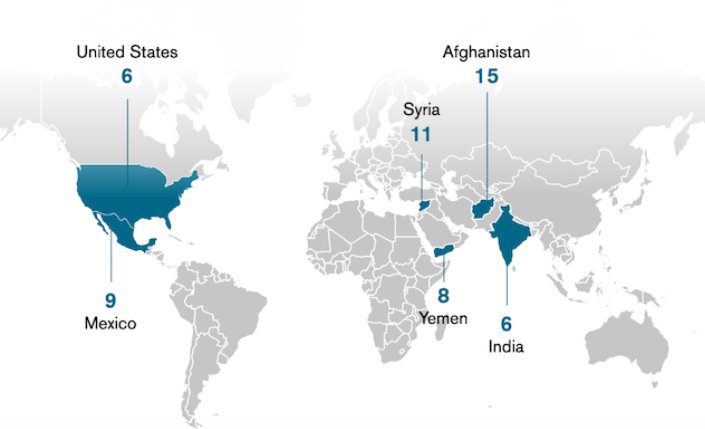 Reporters Without Borders showed a rise in hostility towards journalists around the world are many, 80 dead, 348 jailed, 60 held hostage:

But  from killing,imprisonment to throttling  are in Ks unable to chart world view.

RSF declared in its report that for the first time since the U.S. invasion in 2003, Iraq had not reported a single journalist death.

Meanwhile, the report pointed out that more than half of the world’s imprisoned journalists this year were being held in China, Turkey, Iran, Saudi Arabia and Egypt.

RSF stated that overall, a total of 348 journalists are currently detained across the world – compared to 326 that were detained at this time last year.

It said that China continued to remain the world’s biggest jailer of journalists – with 60 journalists currently detained in the country.

The media watchdog group, RSF advocates for political freedoms and has been released its annual report on violence and abuse against journalists worldwide since 1995.

So far this year, 80 journalists have been killed, 348 are in prison and 60 are being held hostage

PARIS, France – With 80 professional journalists, media workers and citizen journalists killed on the job so far this year – 2018 has been declared as the worst year on record for deadly violence and abuse toward journalists.

A Paris-based free-press advocacy group, Reporters Without Borders (Reporters Sans Frontieres – RSF) has revealed in its annual report that more journalists were killed, abused and subjected to violence in 2018 than in any other year on record.

The report, which warned that those in the profession of journalism were facing an “unprecedented level of hostility,” noted that at least 63 professional journalists were killed doing their jobs around the world this year.

RSF said that the number of journalist killings rose by 15 percent in 2018, compared to last year.

It pointed out that, overall in 2018, 80 professionals, including journalists, media workers and citizens journalists have been killed.

According to RSF, the number of murders, imprisonments, hostage-taking and enforced disappearances of journalists increased compared to last year.

RSF revealed another shocking fact in its report, pointing out that 61 percent of the journalists killed this year, were murdered or deliberately targeted for their reporting.

It said that 39 percent were killed while reporting.

The annual report by the organization also noted that 348 reporters were currently detained across the world, while 60 are being held hostage.

Criticizing politicians and public figures for encouraging disdain for the news media, the advocacy group said that its findings had highlighted the volatility faced by journalists across the world over the past twelve months.

Unveiling the findings of the report, RSF Secretary General Christophe Deloire said in a statement, “Violence against journalists has reached unprecedented levels this year, and the situation is now critical. The hatred of journalists that is voiced, and sometimes very openly proclaimed, by unscrupulous politicians, religious leaders and businessmen has tragic consequences on the ground, and has been reflected in this disturbing increase in violations against journalists.”

Over the last 12 months, high-profile journalist murders and imprisonments have been reported in different parts of the world.

Several times through the last 12 months, Trump has decried the country’s media as the “enemy of the people.”

Apart from Trump, Hungary’s right-wingPrime Minister Viktor Orban too has faced international criticism over demonizing the media and spreading disinformation.

Further, the TurkishPresident Recep Tayyip Erdogan has labelled the journalists that have been critical of his ruleas “terrorists.”

Deloire pointed out, “Amplified by social networks, which bear heavy responsibility in this regard, these expressions of hatred legitimize violence, thereby undermining journalism, and democracy itself.”

In its report, the RSF cited the “shocking murder” of veteran Saudi Arabian journalist and Washington Post columnist Jamal Kashoggi – a spine chilling case that rattled the world in October, sparking an international outcry.

RSF said in its report that the Khashoggi’s murder demonstrated “the appalling nature of the Saudi regime and Crown Prince Mohammed bin Salman’s oppressive methods.”

He was killed inside the Saudi consulate in Istanbul in October this year.

While Saudi officials have rejected accusations that the crown prince ordered his death, Turkey continues to pursue the case to deliver justice to those involved.

The other cases cited in the RSF report included the high-profile killing of Slovakian journalist Jan Kuciak, the execution-style shoot out of Ruben Pat outside a Mexican beach bar, the killing of Yaser Murtaja by an Israeli army sniper.

The report also cited the case of Bulgarian Viktoria Marinova, who was beaten, raped and strangled.

RSK also highlighted the death of Malta’s Daphne Caruana Galizia in a car bombing and the shocking arrest of Reuters journalists Kyaw She Oo and Wa Lone in Myanmar.

RSF pointed out in its report that the cases demonstrated “how far some people will go to silence ‘troublesome’ journalists.”

RSF said that more than half of all journalists killed this year were targeted deliberately – which it said reflects a hatred of the media in many areas of society.

Afghanistan was declared the world’s deadliest country for journalists this year, while its most powerful ally in the more than 17 year long war – the U.S. found a place on the very same list for the first time in history.

According to Reporters Without Borders, Afghanistan, Syria and Mexico were the three most dangerous countries for journalists to work in this year.

It pointed out that 15 reporters were killed in Afghanistan this year – making it the deadliest country in the world for journalists.

Of the 15 reporters killed, ten died in a series of attacks in the country’s capital city of Kabul in April.

RSF said that 11 reporters were killed in Syria, while nine were murdered in Mexico.

Yemen, which was ranked as the fourth deadliest in the world for journalists, recorded eight deaths.

According to the report, for the first time ever, the U.S. had joined the list of deadliest countries for journalists – recording six reporter deaths this year.

The cases that led to the U.S. being ranked as the fifth deadliest country for journalists this year included the murder of four journalists in a shooting at the Capital Gazette newspaper office in Annapolis, Maryland in June.

Before that, in May this year, two U.S. journalists were killed while covering the Subtropical Storm Alberto in North Carolina after a tree crushed their van.

Further, the CNN New York headquarters has been evacuated over bomb scares in the last three months – with one of the bomb scare turning out to be real.

The U.S., which became the only fully developed country to feature among the top five on the list, shared its ranking with India, where six recorded fatalities were reported through the year.

There was another first this year.

Ever since Al Qaeda and ISIS swept into the country a few years back, Iraq has been one of the most dangerous reporting zones in the word.