Hungary rooted in discontent with the government’s limits on academic freedom, corruption, social security  issues and thousands marched in Budapest on Friday against the new labor law and the government’s move to set up a separate system of courts it would control. The satirical Two-Tailed Dog Party (MKKP) said the rally was in support of “government policies, Christmas and snowfall.” 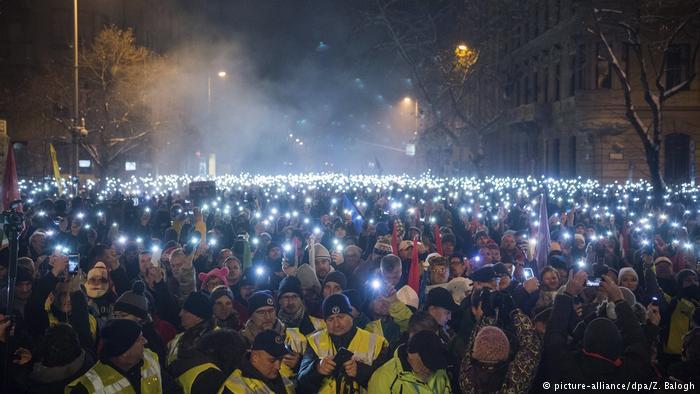 Protesters raised slogans on  recent moves by Prime Minister Viktor Orban’s government, such as the ban on homelessness and the ouster of the Central European University backed by the US-Hungarian billionaire George Soros. The Hungarian regime often accuses Soros of devious anti-government plots.

“We can finally work eight days a week,” read the invitation sent out by the satirical Two-Tailed Dog Party ahead of a Budapest march. Viktor Orban dismissed the protests over the new labor law as “hysterical shouting.”

“I want to give birth to a stadium,” read one of the signs carried by protesters on Friday, referencing Orban’s focus on raising the birth rate and building overpriced sports facilities.

Hungarian public responded with anger after the government pushed through changes to the labor code last week, with the new law allowing employers to demand up to 400 hours of overtime and delay payment for up to three years. The displeasure over the so-called “slave law” has already prompted repeated protests.

The MKKP urged people to bring “gifts for the government” as well as “gas masks” and “layered underwear,” alluding to thousands marching in freezing temperatures last Sunday before police used tear gas and smoke grenades to disperse the demo.

“We can finally work eight days a week. We no longer need to hassle with independent courts,” the party said in their invitation posted on their Facebook page. “Homelessness has been eliminated. Irritating foreign schools will vanish. And Soros, Soros, Soros, Soros, Soros.” Media agencies