Russian security agency on Monday said that it has detained a US citizen in Moscow accused of spying.US citizen detained in Moscow ahead of New Year’s Eve celebrations. 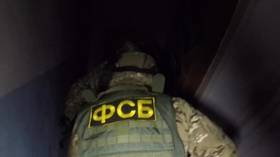 The FSB security service said in a statement that the American was detained on Friday while carrying out an act of espionage and that a criminal case had been opened.

FSB agents detained a US national named Paul Whelan on Friday during “a spying action,” the agency’s press office toldTASS.

Criminal proceedings were launched against the man under Article 276 of the Russian Criminal Code, which covers the crime of espionage.

No details of the suspect’s identity or facts surrounding the operation were immediately disclosed.

The statement identified the American as using a Russian name that appeared to translate as Paul Whelan. No other details have been released yet.